Major Denis J Downing, an Irish Patriot, had been imprisoned in December 1858 because of his connection with the Phoenix Society or Irish Revolutionary Brotherhood in Ireland. He was released and went to New York, where he became an original member of the Phoenix Zouaves of New York before the Civil War. Denis along with his brothers, were active members of the Fenian Brotherhood in New York and were cousins to Jeremiah O’Donovan Rossa. 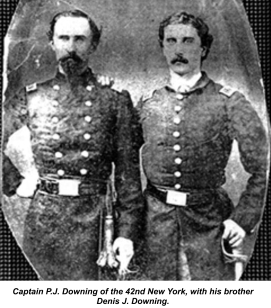 Downing resigned on 9/17/1861 to join the 97th NY, Co B as a 2nd Lieutenant and subsequently promoted to Captain Co H. He was captured at the second battle of Bull Run, where, while trying to rally a broken Union column was captured and taken prisoner to Richmond. He was exchanged in December 1862 and returned to his regiment.

During the first day at the Battle of Gettysburg, Downing was severely wounded and his left leg was amputated. His brother wrote to Fenian Center John O’Mahony about the condition of his brother as well as the losses to the the Fenian Brotherhood after the battle.

You can read more about that letter and the Fenian casualties at Gettysburg here in Damian Shiels’ fantastic and well documented blog on the Irish Americans in the American Civil War:

Denis was discharged for promotion on 2/1/1864 in the 128th Co, Veteran Reserve Corp (Invalid Corp), 2nd Battalion, then through consolidation transferred into the 36th Co, Veterans Reserve Corp, where he continued ti command a battalion of six companies.

Downing was married to Frances Teresa O’Sullivan on 2/9/1864 at the Church of the Nativity in New York City with his brother P.J. as his best man. The couple had two children Mortimer and Ellen.

Downing was mustered out of volunteer service on 10/16/1866, where he joined the regular army, 44th United States Infantry, in the War Department in Washington D.C., serving as a secretary. He finally resigned Dec 15, 1870 because of failing health, having contracted tuberculosis and returned home to Ireland hoping to get better.

Denis Downing died shortly after arriving back to his home and was buried in the Old Chapel Yard graveyard in Skibbereen. (Special thanks to William Casey of Aughadown, Co Cork, Ireland for identifying the burial site.)