St Patrick’s Day for the Irish has always been a huge affair, especially in San Francisco where the Irish and the Fenian Brotherhood was thriving in the early 1870s.

A photo of passing interest to Fenian scholars, is this photo showing in the background showing a very large broadside on the fence to the back right which advertises the Fenian Brotherhood Civil Ball to take place on St Patrick’s Day at the Union Hall.

This stereoview of the “Central Pacific Rail Road Ferry, Davis Street” by Eadweard Muybridge, San Francisco shows the ticket office on Davis Street in the Embarcadero, San Francisco, with a large sign for the ferry connection across the bay to San Jose, Stockton, and Sacramento, and from Sacramento to Chicago and New York Via the CPRR.

The photo was likely taken in early March 1871 as Photographer Muybridge was about to embark on the Lighthouse Tender “Shubrick”, undertaking his 6 month journey to photograph the American west coastal lighthouses shortly there after. 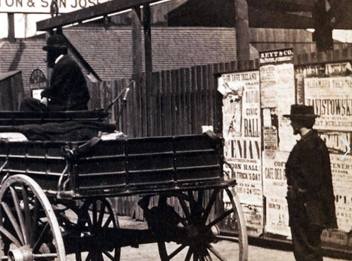 There is also a newspaper advertisement for the same Fenian Brotherhood Military and Civil Ball at the Union Hall on the Evening of St Patrick’s Day, March 17, 1871, which appeared in the March 12th 1871 San Francisco Chronicle Edition, and was also seen in other editions leading up to the event. Before the ball, there was a High Mass in the morning of the 17th of March, followed by a parade by the Fenian Brotherhood and other Irish civic societies.