The size of the Fenian Brotherhood within the Union Army during the Civil War is often overlooked. Membership was growing fast by mid 1863 on the successes of recruiting and fellow Fenian Union Officers leading the efforts. It became a vehicle for Irish men serving in the Union to not only join the Brotherhood to show their love and hope for the future of their beloved homeland, by bringing in monthly dues collected in the field at Circle meeting for that future, but also to donate to the cause of Ireland’s freedom along with their dues. Their military training and skills while fighting for the Union, in all branches of the military, would be an asset to Ireland when the Civil War was over as the Fenians viewed themselves a better match against any British military force.

Many know of some US Irish officers who held rank in the Fenian Irish Republican Army and participated in the raids of 1866 into British North America, but little has been written about of the Raid into Canada East, the invasion toward Montreal. That invasion was the real objective for the Robert’s Wing of the Fenian Brotherhood.

Much of the attention on the Fenians during this period focuses on the Raid from Buffalo into Ontario, Canada West. This Fenian invasion force was meant to be a diversionary tactic so Canadian troops would scramble to that area from all over the region, clearing an easier path for the Fenians in the East from Malone NY and St Alban’s into Canada East, which was set for a few days later.

Unplanned by the Fenians was US intervention, lack of enthusiasm from the local Canadians to join their efforts, and what became termed a “fizzle”, made the Fenian leaders understand the Raids were over even before the Canada East Raid began. But some Fenians in the East, despite hearing what happened outside Buffalo, continued to press on. 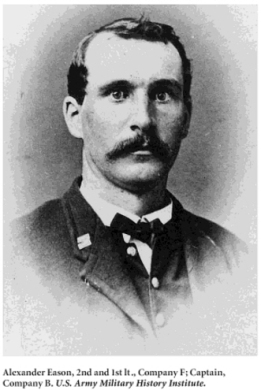 One overlooked Fenian Officer who went to Canada East, and distinguished himself during the Civil War was Captain Alexander C. Eason, of Newark, NJ. He was born 1833 in Ireland, to William and Jane Eason and immigrated to the USA as a youth. He married Anne Adams in Charlestown, MA in 1855.

By the time of the civil war, the Easons had two children, William H (b. 1854) and Emma (b. 1856) and had moved from Massachusetts to Newark, NJ. Alexander had established himself by 1860 as a local constable then later a grocer and a tavern owner by 1863.

In 1863, New Jersey was looking to put more regiments in the field and offered unique uniforms to entice veterans and raw recruits alike to instill a esprit de corps. The 33rd New Jersey Volunteer Infantry was recruited in September 1863 and were issued a modified Zouave uniform. The 35th New Jersey was also issued the same uniform but soon changed to the regulation Union blues, since supplying these unique uniforms were a challenge as they wore out quickly in the field and were difficult to replace. The 33rd New Jersey continued to wear these zouave uniforms until they were mustered out of service in 1865. Both units fought in the Western Theater under Sherman and participated in the March to the Sea.

Alexander joined the 33rd New Jersey Infantry (Mindle’s Zouaves) in Newark and commissioned a 2nd Lieutenant in Company F. He was promoted to 1st Lt of Co B and by September 1864 he was later promoted to captain of this company.

Eason joined the Fenian Brotherhood at the end of the Civil War, and became an active Fenian leader in Newark, eventually leading a squad of Newark men from his former command of the 33rd New Jersey to Malone NY to join the Fenian Raid (Canada East) in June 1866, to capture British North America for Ireland. All Fenian military regiments from the East Coast, including New Jersey, were sent to Canada East (Malone, NY and Vermont), while Western Fenian companies were sent to Buffalo, NY.

Eason was arrested by US authorities after the raid at the border, with other Fenian officers, as he was part of the Fenian command. The United States military grabbed all involved for violating the neutrality agreement with Britain and briefly jailed these veteran officers, who had not yet escaped.

The United States never pursued strong actions against these Fenians and their brief detainment by the US was more welcomed than seeing British justice, as some of their Buffalo Fenian comrades were facing. When Eason returned home, he became a local Irish hero, hailed in the Newark newspapers and recognized at parades and local functions as he continued his Irish Nationalistic spirit serving as a delegate from NJ at several Fenian (Robert’s Wing) Conventions. He also continued to be active in Grand Army of the Republic (GAR) veteran affairs.

The Eason’s moved to Albany, then Gloversville. NY and finally settled in Vallejo, CA.

Alexander died by a self inflected gunshot wound to the head while temporarily insane. on March 15, 1900 and is buried at Saint Vincent’s Cemetery, Vallejo, Solano County California.